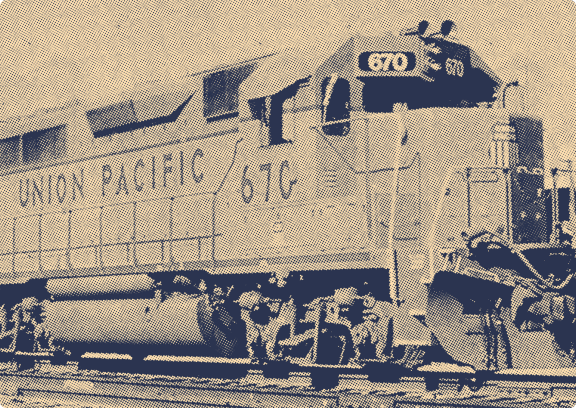 The Locomotives of the Royal Gorge Route Railroad

Originally numbered 728, this locomotive was one of eight GP-40 locomotives built for the Royal Gorge Railroad between 1967 and 1974. These locomotives, numbered 723-733, represented the most modern power the railroad would own, until its absorption into the Seaboard System in 1983, where it ran throughout the Southeastern U.S. as Seaboard System 6648 until merging with Chessie in 1986 to become the CSX Railroad Corporation.

After 6 years, 6648 was acquired for a rebuild to serve a new life hauling commuter passengers between Washington D.C. and Northern Virginia communities on the newly formed Virginia Railway Express. It was during this last rebuild that the locomotive was renumbered to V20, serving that line until late 2012 before coming to Colorado to proudly haul thousands of passengers through the majestic soaring cliffs of the Royal Gorge.

The EMD F7 was a diesel-electric locomotive produced between February 1949 and December 1953 by the Electro-Motive Division of General Motors and General Motors Diesel. Although originally promoted by EMD as a freight-hauling unit, the F7 became one of the most iconic passenger hauling locomotives of the last Golden Age of railroad travel in the 50’s and 60’s pulling such famous trains such as the Santa Fe Railway’s Super Chief or El Capitan and the CB&Q-D&RGW- WP’s combined California Zephyr. Our pair of F7’s were built for the Chicago & Northwestern (CNW) in October of 1949.

The remaining F7’s became surplus, many succumbing to the scrapper’s torch. Happier days were ahead for this pair however as they were rescued by the newly formed Canon City & Royal Gorge Railroad in June of 1998.

Proudly repainted into a heritage scheme of the famous D&RGW that has plied the rails of the Royal Gorge since its original construction, these very historic locomotives have symbolized this company’s revival of the bygone glory and glamor of rail travel through one of the most awe-inspiring natural wonders of our world.

With years of exciting history under its belt, the Royal Gorge Route Railroad combines breathtaking scenery and exceptional service with delicious food, sourced locally and prepared fresh right on board. Grab your tickets today.